My Android Tablet is NOT ROOTED, but I needed to capture some video of the screen footage from my son’s Pocket Minecraft based project. The Google Play store appears to have stacks of apps which will capture video of the screen with one button press, but due to an Android platform restriction, at this time they all require that the device be rooted. I was using a Mac and a non-rooted Nexus7, and here are the steps that worked for me:

Grab the the Android SDK: https://developer.android.com/sdk/index.html

No need to install, just extract it and open the Terminal to where you placed the contents and: adk > platform-tools

(I think Windows user will also need to grab the Google USB Driver: http://developer.android.com/sdk/win-usb.html#download though I have only done this on Mac)

Ensure Developer Mode and USB debugging are enabled on your device, and then connect your device via USB, and in the terminal:

Initially I saw one device attached, which was labelled as being unauthorised:

meanwhile on the device I had a security warning, asking me to permit USB debugging: 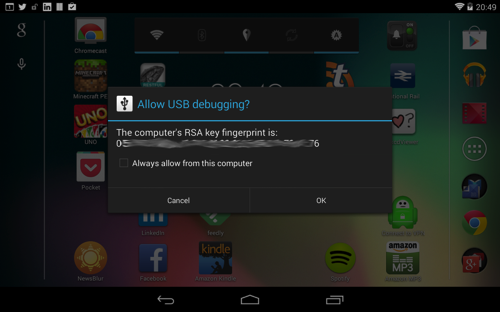 To start a recording:

ctrl-c to end the recording

Then pull the file back to the Mac:

Thanks to the guidance received by the following site: