I wanted to create an animated GIF from a sequence of static images, and initially I was considering a workflow using Photoshop/Lightroom or purchasing one of the many £2 app on the Mac App Store. However, after my recent successes using the Mac Terminal, I wanted to see if I could form my animated GIFs in a similar fashion.

My Goal: Can ‘I quickly create Animated GIFs on the Mac’

But, this uses ImageMagick, so to caveat the last part of the title of this post : while it is easy, and quick, and free, and programmable, and relatively easy, it involves more use of the Terminal, and installing a few ancillary applications. So from a risk perspective, if everything works without a hitch you could easily be up and running in under 5 minutes, but of course if things don’t go smoothly, you could be opening pandoras box to a much longer period of Googling and Terminal’ing to get things working (I hope it’s the former).

So first, I needed to install ImageMagick:

After much praise from developers on Twitter, I had uninstalled MacPorts and installed Homebrew as a better Mac package manager:

and then use Homebrew to install ImageMagick**:

To verify the install:

and then, from amongst ImageMagick’s numerous plethora of image manipulation commands I used:

** I’d recommend plenty of your own research into installing/using/uninstalling Mac Ports or Homebrew or ImageMagick on your machine before proceeding.

Hat-tip: to this article on Stack Exchange for initially getting me to take the more interesting road: 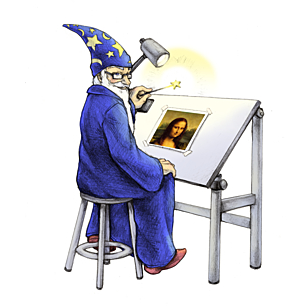