I’m not a massive fan of writing in-browser, and so being recently new to Mac I’d been quite enjoying MarsEdit. However, as the 30 day trial came to it’s conclusion, £27.99 just seemed too steep for such an app.

Searching for comparisons of blogging software, time and again returned very positive reviews of Windows Live Writer, which is a free download for anyone running Windows.

I’ve been a long time user of VMWare’s free ‘Player’ for Windows and use it at home to run a variety of secondary Windows and Linux environments. For the Mac they have ‘Fusion’ which is available via VMWare as a download for £37.78, or as boxed software from Amazon for just £32! (actually dropped to just over £30 last week). Of course, the real cost difference with MarsEdit would be much greater when you include the Windows license – but thankfully, I already had a spare Win7 license I could utilise.

VMWare  Fusion also has the lovely ‘Unity’ mode, which hides all of the Windows User Interface, and just gives me whichever windows app I want the appearance of being a Mac native app, and is launchable via the dock, or finder, Alfred etc.. – it does of course need to have the Win7 VM running in the background, so can take a little longer for it to first come out of suspension. 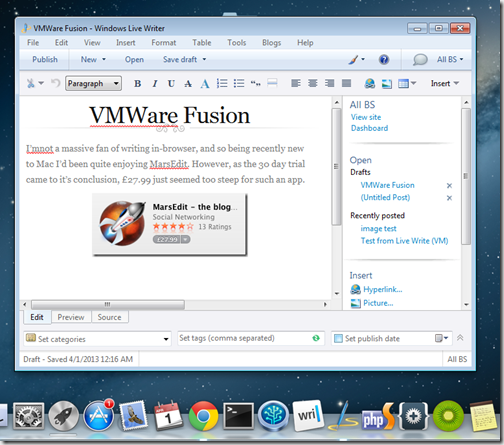 So far, the only niggle appears to be that Windows Live Writer doesn’t natively support the setting of the WordPress ‘Featured Image’ for a post, though it appears there are plugins that might be worth exploring.

The other minor niggle is that all the Windows apps of course expect Windows keyboard shortcuts, and so find my ctrl and cmd fingers getting a little confused.