Use @pixelpipe’s Pi.pe it’s awesome, and for some reason, free!

I’ve been a very happy Picasaweb user for around 6 years. The desktop application Picasa is super fast at auto-importing new photos, has a quick workflow for creating and managing albums, and makes it super simple to update the online and shareable albums on Picasaweb.

Immediately after our eldest was born, our available time became extremely constrained, yet our family and friends became ever more interested in photographic updates as our ever changing bundle of joy grew and developed week by week (followed 3 years later by our second bundle).

The need to change our photo workflow only came when Google rolled out Google+ last year. I’m not sure if I had any alternatives, or if it was my mistake that my Picasaweb account became merged with my Google+ account’s “photos” – but the nature of my utilisation of the former, really did not suit the way I had been using the later.

(I rate Google+ as the most technically capable of the Social Networks – but it is not somewhere that I want to unloose the firehose of our family photos… though it is the easiest way to share our family videos!).

My previous attempt to move to Flickr didn’t exactly go well, and I ended up finding a way to extract a (partial) refund from Flickr.

However, having approached Flickr once more with my updated (i.e. lowered) expectations and with an adjusted mindset, things are resonating much better this time (and I’ve already paid the rather reasonable $45 for 2 years subscription). My principle goal is to enjoy that rather marvellous Flickr API, and am already really enjoying rapid progress offered by PHPFlickr for those purposes.

I had already taken exports from Picasa of all of my albums, and was using Flickr Uploadr to move albums up 1 at a time… but with 207 albums (nearly 32,000 photos) and 118GB, progress was quite slow!

Then I briefly tried ‘Migratr‘ [link] – but there was very little documentation, and it had been 3 years since the code appeared to have been last updated, so after it failed a few times, I uninstalled and moved on.

Finally, I came across @pixelpipe’s Pi.pe and it has been all plain sailing ever since. Authenticate against a multitude of photo/social services: 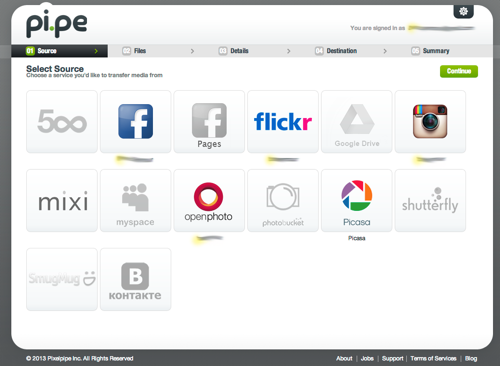 Select the relevant albums to be migrated: 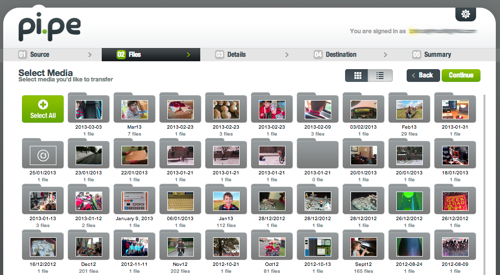 … and wait… coming back to check on progress periodically (you also get an email alert of completion):

OVer the last 2 days, we successfully migrated around 13,000 photos over to Flickr, with the Picasaweb ‘albums’ automatically converted into Flickr ‘Sets’.

Hopefully the rest of the migration will continue as smoothly, and by early next week I hope to see all 32,000 assets moved over, so I can start to clean down Picasaweb, and start to use Google+ photos properly.